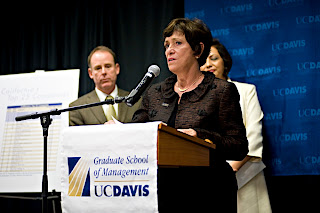 At a press conference on Monday, November 18, we released our fourth annual UC Davis Study of California Women Business Leaders. The UC Davis Graduate School of Management, in partnership with the Palo Alto-based Forum for Women Entrepreneurs & Executives, conducts the annual census, which details the presence of women at the very top of the 400 largest publicly held corporations headquartered in the state.

Our findings continue to paint a disappointing picture of female representation on the boards and in the executive suites of these high-profile companies: women hold only 10.9% of the top decision-making positions, virtually unchanged from last year. Nearly a third of these 400 companies have no women in top executive posts or on the board of directors.

It's a disappointment and a missed opportunity to include a more diverse pool of leaders in California's corporations. The same innovative thinking that drives the world's eighth largest economy is not propelling women into key management positions at the largest public companies in the Golden State. Once a year, we'll continue to shine a spotlight on what the top of corporations look like.

In fact, our 2008 census suggests that a woman today stands a better shot at winning a seat in the U.S. Senate than a CEO job in California. Only 13 of the 400 companies have a woman serving as CEO.

California has more high-profile women political leaders than ever before: U.S. Sens. Barbara Boxer and Dianne Feinstein, and House Speaker Nancy Pelosi in Washington, and here at home, state Assembly Speaker Karen Bass. Their achievements, individually and collectively, are cause for celebration. But I have to ask: What will it take for us to see similar progress in California's boardrooms and executive suites?

Read my Op-Ed on this issue in the Sacramento Bee.

Read more about the census, the press coverage and download the study