From the Pacific to the Atlantic by Bus in Two Hours 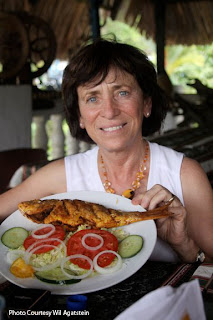 Panama’s geography has been simultaneously its great fortune and the source of its violent and often tragic history. Shaped like a bending salamander, the Panamanian isthmus today connects democratic ecotourism haven Costa Rica to the north, with Columbia and its illicit drug trade to the south. Panama is a long, skinny country with a history of outsiders controlling its fortunes.

Panama is an economically viable nation because of a canal that allows the transshipment of huge container ships and easy passage for cruise liners between Asia and North America. This accident of geography—a tiny waist that separates the Pacific Ocean and the Caribbean Sea—makes Panama a valuable piece of real estate in the global economy.

Panama was already important to maritime trade before the French started building the Panama Canal in the late 19th century. The U.S. Army Corps of Engineers finished the job in the early 20th century after the death of 25,000 laborers and soldiers from disease and accidents.

The region was favored by European explorers and traders as a way station for trade moving between South America and Europe. Panama’s location and fine harbors made it a favorite place to exchange goods and money, and often slaves from Africa as early as the 16th century.

On our first day in Panama we loaded into a rental bus for a trip to the Caribbean—a two-hour drive to the other coast. Panama has a tropical climate, but this season it is less humid and rainy than most of the year. We stopped at a roadside stand to try fresh coconut milk and buy a couple of watermelons. We inspected the plantains and taro roots, and the homemade condiments packaged in old Heinz ketchup bottles. The local stray dog sniffed about.

We stopped at Portobelo which lives up to its name "beautiful port." It is a lovely harbor surrounded by steep green hills and is a naturally defensible place in which to drop goods traveling up the coast. Portobelo is now a World Heritage Site whose museum and buildings preserve the memory of the region as a site of piracy, plunder, and the slave trade in addition to its role in merchant shipping between the Old and New Worlds.

The remnants of that world remain in the Custom House, the fortifications, and poignantly in the Panamanians of African descent who live simply, and in some cases in obvious poverty, in exactly the same place their ancestors were bought and sold.

Panama was, and remains, a country blessed and cursed by geography.

Continue to follow our travels on the trip's Web site >>
Posted by UC Davis at 10:56 AM