We Stand at the Center of World Trade 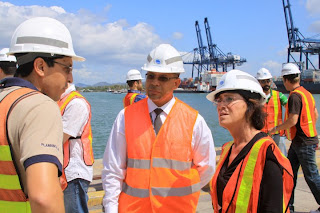 MBA students study world trade in many ways. They study supply chain management—how to efficiently design, source, assemble and distribute goods from around the world. They examine global capital flows and currency exchange rates and learn international finance and tax strategies. Our students learn the impact of trade on labor practices, migration, energy use and economic development. In many ways the students came to Panama knowledgeable about global trade and its impact as a result of their business experience and what they are learning in class.

For two days this week they got to experience global trade in a way we cannot teach them at UC Davis. They saw trade as a material flow, as huge ships carrying goods from one distant place to another. There is nothing quite like seeing dozens of ships queued up to enter the Panama Canal, or standing in the midst of thousands of containers being off-loaded and re-loaded at the Port of Balboa to appreciate the enormity and connectedness of global exchange.

On Wednesday we went to the Panama Canal Authority, the governance and administration office of the Panama Canal, and to visit the Miraflores Locks. The Canal is not the long tube-like passage I had imagined. Rather it is a series of locks that raise ships in a step-wise fashion at one end until they reach the large man-made Gatun Lake which is 85 feet above sea level. They traverse the lake and a series of islands in the middle of the country under the control of one of the Canal’s 300 pilot captains. The ships then step down through another series of locks to the other ocean, either the Atlantic or Pacific depending on the direction of travel.

I could see why cruise ships take this trip. Not only is it a bird’s eye view of an engineering marvel, it is a trip through a lush tropical landscape. The whole trip takes 24 to 48 hours and the crossing fee can be well over $100,000. The largest tariff ever was more than $300,000.

The Panama Canal is being expanded to accommodate larger ships. “Panamax” ships – the maximum size vessel currently accommodated in the Canal, are now dwarfed by newer container ships. In order to compete successfully with the Suez Canal, the Panamanians are developing a third series of “post-Panamax” locks. This is a $5+ billion investment by the Panamanian people in the future of the Canal.

Because the Canal is not being used by the U.S. as a strategic military asset, but by Panamanians who see it as an economic and development asset, they are investing in it as a business. It is extremely well run—something we learned from engineering consultants back in California—and is now a place that Panamanians can learn management techniques. We saw a troop of maritime engineer students who were on internships at the Canal.

Through a couple of well-placed phone calls we were invited to stand, literally, on a swaying bridge atop the Miraflores Locks. I may travel through the Canal some day, but I suspect that this was the only time I will ever stand on the Panama Canal.
Posted by UC Davis at 12:29 PM

I enjoy your blogs. Please encourage the others to blog. There has been very little posted, either written or photos, for the past week. Judging from the number of visitors to this site, I'm not the only interested in keeping up with what is going on with the group.

I traveled to Panama for business in 2005 while I was still in the WPMBA program.

Our team did a needs assessment study with the Canal Authority for implementation of Program/Project Management processes and tools to manage the expansion projects which were then still in the planning stage.

The tour of the canal was the highlight of our trip. We even got to go on a dredger which was one of the largest and most technologically advanced in the world at that time.

We also toured engineering and construction offices in the countryside to interview Authority staff.

Panama is a beautiful and vibrant country with very friendly people. I specially liked the fact that conversion and exchange rates were no problem since Panamanians use US currency.

Watch out for the mosquitos and the bugs-- they're everywhere.

The Law firm of Patrick H. Yancey located in Maritime Lawyers in Houma Louisiana specializes in representing persons injured while working as a crewmember on a ship tug supply vessel crew vessel jack-up vessel derrick barger pipe lay barger or any other type of vessel.